Home News Flying in the rain

Flying in the rain

Flying in the rain – It sounds like a song title doesn’t it!

Flying in the rain is one of those things that you know you shouldn’t do. You’ve heard or read something somewhere but you’re not really sure of the consequences… Well, you’re not alone!

I thought I’d draw your attention to it following a recent episode where a group of us decided to fly down from Blencathra through light rain rather than pack up and walk down.

We all took off, flew without incident and made our descent out and over our landing field. As I lined up to land in the field I noticed Richard on the glider in front of me sinking out quickly relative to the others in front. I thought he’d met a stronger head wind so kept my speed up, over flew him, didn’t encounter any wind and landed in the far corner. 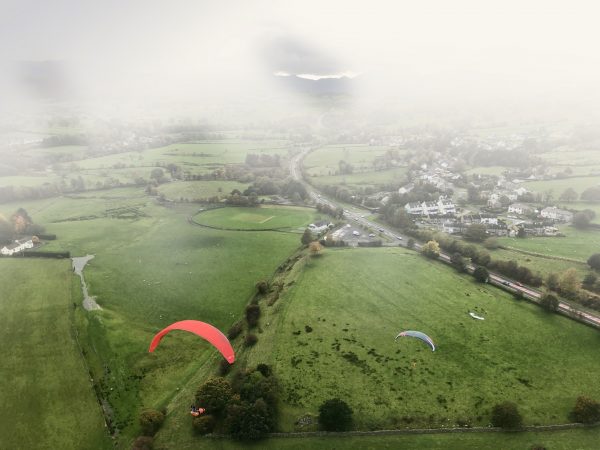 As it transpires his glider had entered a parachutal stall as it pitched back to climb out on exit from his spiral descent. Richard was quickly onto the speed bar which recovered the glider somewhat but he had to lift off the bar as he was heading towards the wall at the front of the field. The glider rocked back as he came off the bar and it entered a parachutal stall again, the glider’s sink rate increasing to over 6 m/s. He landed awkwardly but safely.

So, what had happened, why and how to avoid it again…

Gliders are neither designed to be flown wet nor are they tested when wet. The way a glider will react when wet is not precisely known and is unpredictable and the reasons have never been thoroughly explored.

Big differences in behaviour occur depending on many variables; glider type, age, material, condition, weather, amount of water, etc. Some gliders are hardly affected, as reported by pilots having flown through rain on XC flights, while others report that even minimal moisture is sufficient to cause problems. ANY glider in any class may be affected.

We all know that flying with a wet glider is potentially dangerous and should be avoided. But, sometimes it’s unavoidable if you want to fly; laying out on wet grass or melting snow for instance. Your glider can also become wet during flight; from rain, drizzle or mist or from condensation forming on the glider around cloud.

A wet glider is heavier; this will affect handling, increase wing loading and stall speed. The centre of gravity will also move back resulting in a change of angle of attack and increasing the likelihood of a parachutal stall. Old fabric may be more prone to this as they will absorb more water.

However, on newer gliders, water droplets may be encouraged to bead on the top surface by the fabric coating. This results in more turbulent air in the boundary layer and early airflow separation increasing the chance of early parachutal stall.

A combination of both probably occurs, the glider gets heavier and the airflow is disrupted.

Here’s a video of a glider entering a parachute stall when recovering from big ears with wet glider (the big ears cause an increased angle of attack exacerbated by the pilot pumping brakes to exit): https://www.expandingknowledge.com/Jerome/PG/Skill/All/J_Tips/Video/2003_BigEars_Rain_Pumping_DeepStall.mp4

The best thing to do is to fly straight and fast to land. Fly with hands up, make gentle turns if you must. Applying speed bar will help.

The worst thing to do would be to slow the wet glider down in flight by applying brakes or doing big ears. This increases the angle of attack taking you closer to the point of stall.

There are many recorded incident reports and some good articles along with other sources of info already online. These contain more info about the effects on flight and good instructions on what to do in the event of parachute stalls. Rather than repeat all of that info here I have added links to examples below:

From the GIN GLIDERS Bolero 6 manual: